This is my grandmother. Annie Pike Greenwood. A notable Idaho Writer. She published a book about southern Idaho farmsteading “We Sagebrush Folks” in the mid 1930s.

A year ago June, I donated several boxes of her manuscripts, papers and photos to Idaho State University, which created an Idaho Writers Project. Little did I know it would open doors for many people, including Idaho Public Television, to produce a documentary on her legacy.

This post is just a teaser for an unfolding journey in my life that has a deeper meaning that I ever thought. But tease it will be. Keep checking in often as I reveal more. And let me hear from you.

But be sure to find Idaho Public Television (idahoptv.org) on October 25 to see details on the documentary. Including music by me! 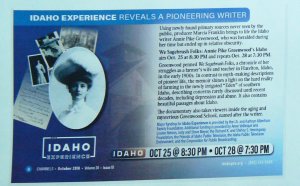 Idaho State University Eli M. Oboler Library hosted an exhibit of a few of Annie Pike Greenwood’s manuscripts and effects Ocotber 18. They held a nice little reception with discusion from folks that had attended the old Greenwood School. They had some memories to share- there used to be a picnic ground with various rides for the kids. That’s all gone, but the memories remain.

The school building is now in disrepair but all agreed an effort should be made to refurbish it.

The interior skeleton made from west coast cedar is still straight and true as is the western hemlock flooring. So there is some hope. It will take a great effort and many factors coming together to make it happen.

Watch this space for further developments. And comment and ask questions!

This Alas Blancas Music was founded in 1985 in Costa Rica. It features copyrighted works by HKTIII. It is not affiliated with any other enterprise by that name. Enjoy!